Seven Sounds Brewing Company is a craft microbrewery in Elizabeth City, North Carolina, just off of U.S. Highway 17 and within driving distance of Tidewater, Virginia, and the Outer Banks. Our brewery is located in the old Hurdle True Value Hardware building on Water Street in historic downtown Elizabeth City.

Our shared dream of creating a brewery, then called Elizabeth City Brewing Company, started in 2015. We had plans to revitalize the historic Fowler Building across the street from where we are now, but in 2017, the site moved to 112 N. Water Street and into the equally historic Hurdle Hardware building. The expansive space and idyllic waterfront location made the new location a perfect fit for our brewery.

After an extensive renovation that included removing a third floor (to align with historic registry requirements), our brewery and taproom opened in the winter of 2022. For more historical facts about our space, see below! 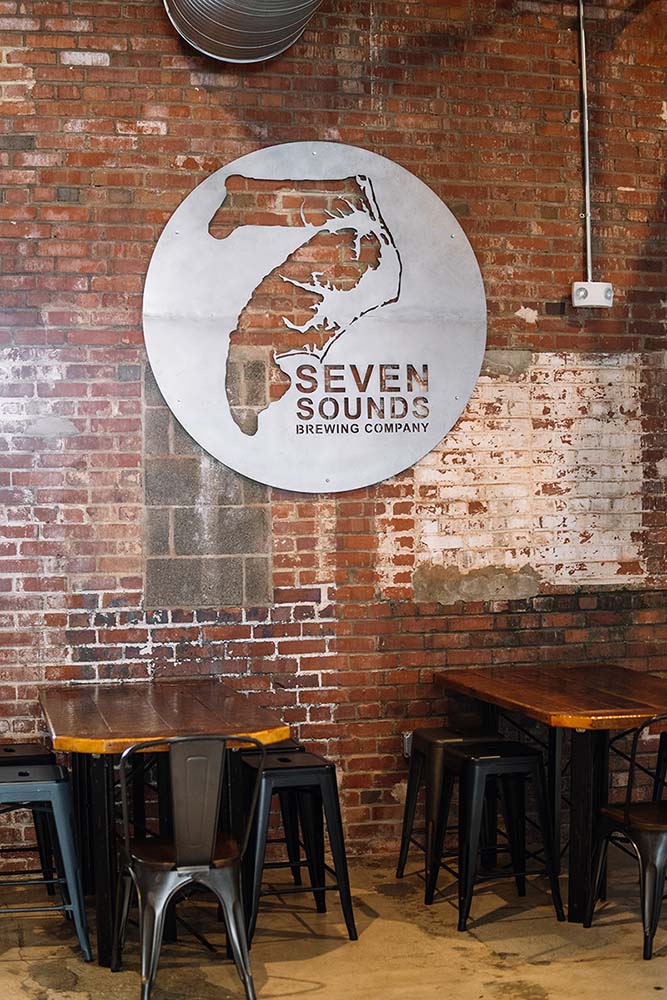 Built in 1885, the site was originally the Lathrop Oil Mill. The two-story brick commercial building was rebuilt in the 1940s, after the original structure was destroyed in a fire. The building was occupied by Jordan Company, Inc., an electrical supplier and distributor.

The building was then converted into Hurdle True Value Hardware, which closed in the early 2000s.

With the involvement of several local investors and business owners, Seven Sounds Brewing Company secured its new home in September of 2017 and historical renovations began. The added third story roof was removed to bring the building back into its original historical state. Windows, which had been added for the condominiums, have been removed, and warehouse windows similar to the originals have been reinstalled. Seven Sounds Brewing Company has worked hard and spared no detail to ensure that the building could regain its historical significance, charm, and value.